The positive outlook reflects Airtel's improving operating profile credit metrics, including Moody's expectation of growing free cash flows and liquidity over the next 12-18 months, particularly at the core Indian operations.

"If the improving operating performance can be sustained, it could support an upgrade to investment grade within the next 12-18 months," Moody's said in a statement.

Moody's said that the Ba1 CFR rating considers the company's position as one of the largest telecom service operators globally in terms of subscribers (471 million), its solid market position in India's high-growth mobile market, and its large spectrum holdings.

"The continued expansion of profitability, particularly at its core Indian mobile business, together with a steady reduction in its balance sheet debt, is needed to mitigate the potential effect on Bharti's credit metrics of significant investments in 5G and the compounding growth of deferred liabilities during the moratorium period," Moody's lead analyst for Bharti Di Chiara added.

The upgrade comes a day after the company took the lead in announcing a hike in mobile call and services rates in the range of 20-25%.

The firm reported a 27% increase in its consolidated reported EBITDA to INR 272 billion for the six months ended September 30, 2021, compared with the same period in 2020. 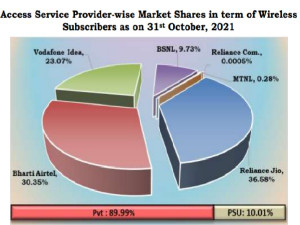