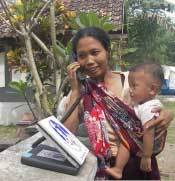 One of the most important subjects Developing Telecoms reports on regularly is Disaster Management. We were therefore pleasantly surprised to find that the Economist had recently published an article with the above title. Subtitled "You don't have to be big to make a difference" it is reproduced here, to reach a wider audience...

The lumbering giants of humanitarian relief have been hard at work in recent days, trying to make sure that next time a flood, earthquake or conflict threatens millions of people in a remote, inaccessible place, the response is as swift as possible. In the Italian town of Pisa, the UN World Food Programme (WFP) has organised a boot camp for aid-workers in war or disaster zones, teaching them how to dodge gunfire, avoid kidnappers - and keep in touch with head office. Meanwhile, Unicef has summoned a clutch of other organisations to Sweden to discuss ways in which they can improve communication, both literally and metaphorically, in the crucial days after catastrophe strikes.

However, many a rescuer would agree that a tiny non-governmental organisation based in the southern French mountains has done more than any of these vast bureaucracies to solve the problem of providing telecoms after a disaster.

The story began in 1991 when Jean-François Casenave, a junior French civil servant, took time off work to help Kurdish refugees fleeing their homes in northern Iraq. He handed over some clothing given by kind people in the French Pyrenees, and tried to work out what the victims really needed.

Both there, and in a later mission to help refugees streaming out of Kosovo, Mr Casenave was overwhelmed by pleas from people who wanted family news, and requests for help, conveyed to relatives elsewhere. He realised that his skills as a communications provider were as badly needed in emergencies as those of doctors and engineers. Telecoms were vital both for aid-workers - to co-ordinate helicopter flights and get them to areas of distress - and for the victims, whose hopes of avoiding destitution often depended on finding relatives in safer places.

In its nine years of life, the NGO known as Télécoms Sans Frontières (Telecoms Without Borders) has chalked up nearly 60 missions to disaster zones, including parts of Indonesia wrecked by the 2004 tsunami. However, with a dozen full-time staffers it remains minuscule, and reliant on volunteers, from graduates to pensioners. Last October the NGO got a five-year grant of US$2 million from the UN Foundation (set up by Ted Turner, an American philanthropist) and the Vodafone Foundation, the mobile-telephony firm?s charity arm. The money was a down-payment for doing, a bit more formally, the kind of job that TSF already specialised in: acting as an advance guard for big, UN-managed operations.

And TSF was getting along fine, on an annual budget of just US$950,000, even before it won its new grant. Last May, when an earthquake struck Java, a French-based TSF staffer and three volunteers reached the disaster zone, complete with laptops, in barely a day. Money isn?t everything.