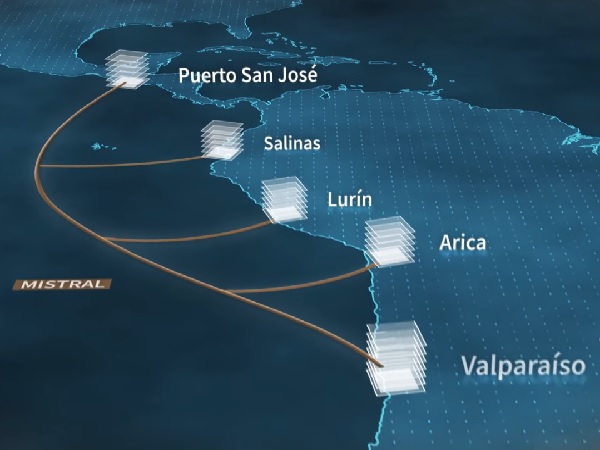 According to a release from the global digital telecommunications infrastructure operator with an extensive submarine cable portfolio, the Mistral system, which has been designed and built by SubCom, is a next-generation high-capacity fibre optic submarine cable that runs along the Latin American Pacific coast linking Puerto San Jose (Guatemala), with Valparaiso (Chile).

The release noted that with approximately 7,300 km, six fibre pairs, and 132 Tbps of potential capacity, Mistral is the first subsea cable in the last 20 years to connect Guatemala, Ecuador, Peru, and Chile.

“With the rapid rise in cloud adoption and an increasing demand for higher capacity, lower latency, and higher availability, this next generation submarine cable is ready for service at a pivotal time,” remarked Mario Martín, Telxius CEO. “Mistral means that Telxius effectively contributes with the highest standards of service, reliability, and security in the region, creating opportunities for businesses and communities across Latin America and optimizing digital services for society at large”.

The Mistral cable was named after the Latin American poet Lucila Godoy Alcayaga, otherwise known as Gabriela Mistral, who was the first Latin American woman to receive a Nobel prize.

"In combination with Junior, Tannat, and Brusa, Mistral allows Telxius to offer next-generation diverse and robust subsea network routes throughout Latin America and connects the region to the U.S. and beyond. These systems represent essential infrastructure that enables Latin America to meet today’s enterprise needs," said the release.