Russia’s largest integrated digital company Rostelecom and VEB Ventures, a company of the VEB.RF group signed an agreement on the formation of the Atlas joint venture to create a fundamentally new backbone fiber-optic communication line (FOCL) Transit Europe – Asia of a new generation (TEA NEXT).

According to a joint press release, the new line will connect the Russian western and eastern borders with the largest cities and link to Russian borders with Mongolia and China. The network will also be extended from the country's borders with Europe to the main European traffic exchange centers in Frankfurt and Stockholm and will link Vladivostok to Busan, Tokyo, and Hong Kong via underwater communications channels.

"With the corporate set-up stage of the project now completed, the construction phase of the TEA’s main segment is expected to start in 2022. The project will see Rostelecom and VEB Ventures each invest around RUB 6 billion in Atlas at the initial stage, while the strong interest expressed by financial partners signals the potential for external investor groups to join the project," the release said.

As announced earlier by Russia’s Deputy Prime Minister, Dmitry Chernyshenko, TEA NEXT will be instrumental in shaping the national digital economy and boosting innovation in every sector. The infrastructure developed by the joint partnership of Russia’s two digital leaders under a brand new business model is also a highly attractive investment project both in Russia and internationally.

TEA NEXT started in the summer of 2020 when Rostelecom founded the operating company Atlas and commenced the construction of the first segment running from Moscow via Saint-Petersburg through to the Latvian border.

The total investment is expected to reach around USD 650 million in the next few years with a view to finance the project up until 2025, partially by Atlas (through the JV fund) and a syndicated loan facility from VEB.RF, other Russian and international banks, many of which have already contractually committed to the development of the project. 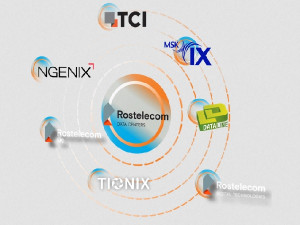