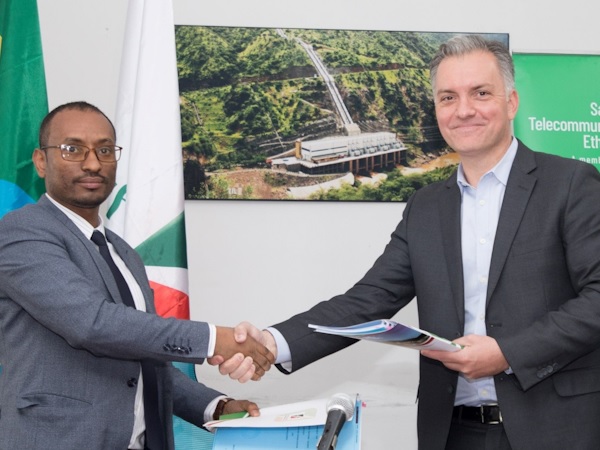 Under the deal, Safaricom will use a network of optical ground wire (OPGW) cables already installed along the high voltage transmission lines owned by EEP. The five-year lease agreement to share the infrastructure was signed by the CEO of EEP Ashebir Balcha (pictured, left), and CEO of Safaricom-Ethiopia, Anwar Soussa (pictured, right).

Anwar hailed Ethiopia's move to cooperate with Safaricom in the infrastructure sector and expressed his company's willingness to work with the EPP in a win-win situation. "We are grateful for the spirit of cooperation from EEP on the win-win partnership to support our contributions to the digital transformation of Ethiopia," he said.

Safaricom said that it has finalised preparations to launch commercial operations to provide telecom service to Ethiopians, becoming the first private and foreign entity to offer these services in the country.

The shared infrastructure will be used as part of Safaricom ET’s network to provide national telecommunications services in the forms of voice, data, video, text, messages, and conferencing, it is stated on the signing ceremony.

The first phase of the lease agreement allows the telecom firm to share 4097km, the second phase 2078km, and the third phase 2904km long optic-fibre lines, according to the EEP.

The state-owned electric producer currently has 15,000 kilometres of fibre optic cable. At least 8,745 kilometres are being used by Ethio Telecom on lease.