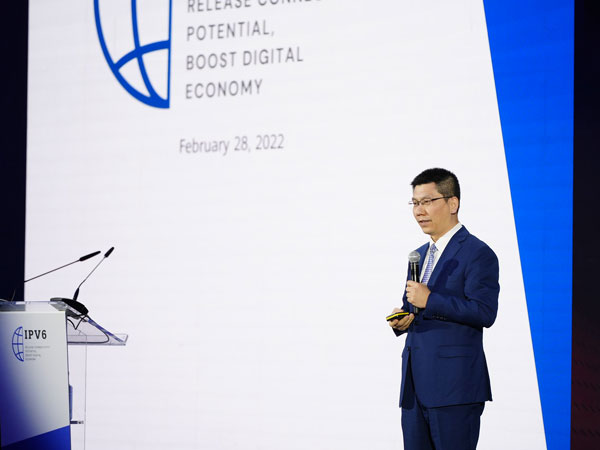 Zhao noted that the rapid development of digitalization poses new requirements on IP networks. The first requirement is massive IoT. By 2030, there will likely betens of billions of IoTdevices, meaning that massive access will become an important basic capability for IP networks. With the advent of the cloud era, more and more enterprises adopt multi-cloud connection, posing requirements on network flexibility and real-time performance. In the future, not only will office services be moved to the cloud, so will production services. This poses higher requirements on deterministic network quality. To meet these new requirements, IPv6 Enhanced will further unleash the value of connectivity in terms of deterministic quality, programmability, intelligent O&M, and more.

IPv6 Enhanced not only drives innovation and entrepreneurship, digital economy transformation, S&T development, and economic growth in the post-pandemic era, but also plays an important role in the digitalization of numerous industries.

In the operator sector, the IPv6 Enhanced Cloud-Network Express solution helps operators build differentiated cloud access private lines by leveraging their advantages in network resources. This allows operators to provide fast and good cloud access experience for users. On the access side, the one-box multi-connection solution helps users quickly access clouds. On the aggregation side, the pan-private line scheduling solution enables unified access and smooth evolution. And on the backbone side, the SRv6-based intelligent cloud-map algorithm enables optimal scheduling of cloud-network resources.

In the financial sector, new services such as online transaction and online payment are emerging one after another. While pursuing stability, this sector also needs to enhance the agility of financial services. SRv6 enables branches and outlets in different regions to access cloud services in one hop. Based on the current load status of the clouds and networks, the corresponding scheduling algorithm flexiblyschedules cloud and network resources. Intelligent O&M based on technologies such as in-band flow measurement ensures the stable and reliable running of financial service networks.

In the manufacturing sector, the transmission of industrial control signals has very strict requirements on the network. In the smart manufacturing industry, IPv6 provides sufficient addresses for the large volume of sensors, while network slicing provides dedicated network-level assurance for different services. After IP-based reconstruction, massive production data can be quickly transferred to the cloud, and the computing power and intelligence of the cloud can be efficiently transferred to the production sites to guide production lines more accurately and efficiently.

From connecting people only to connecting everything, IPv6 Enhanced has been put into commercial use in more than 100 countries, effectively supporting the digitalization of various industries, such as finance, manufacturing, energy, education, and healthcare. Let's embrace IPv6 and IPv6 Enhanced technologies to accelerate towards a new digital world.