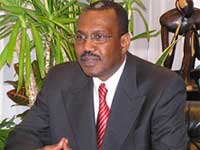 "We need a Marshall Plan for ICT infrastructure development in Africa. We have to mobilise the world's human, financial and technical resources to support economic growth, employment and development across Africa."

These were the words of ITU Secretary-General Dr Hamadoun Touré at a press conference in Genevaheld jointly with the UN Global Alliance for ICT and Development (GAID). Dr Touré made his plea for Africa's ICT infrastructure when announcing details of this year?s Connect Africa Summit (details below). While investment in ICT infrastructure in Africa has improved dramatically in recent years, representing a total of US$8 billion in 2005 (up from US$3.5 billion in 2000), and growth in mobile phones has increased by as much as 400%, Africa has fallen back in overall connectivity. While mobile has surpassed fixed-line telephone access, fewer than 4 out of every 100 Africans have Internet access; broadband penetration remains below 1%; and 70% of all Internet traffic within Africais re-routed outside the continent, driving up costs for businesses and consumers.

Dr Touré added that support was pouring in from partners in this endeavour, including from leading ICT companies in Silicon Valley and elsewhere who have been given the challenge of replicating their successes in Africa - as well as from governments, international organisations and development banks. He pointed out that the Chairman of Intel Corporation (Craig Barrett) is spearheading the efforts through his leadership of UN GAID

Only eight years remain to meet the 2015 targets of the UN Millennium Development Goals (MDG): drastic steps are required. Dr Touré pointed out that meeting ICT connectivity targets would act as a catalyst in achieving the broader development goals: "ICT is a means of creating wealth and sustainable economic growth."

Further and welcome support for Connect Africa has made its presence felt. Speaking at an ITU function, UN Secretary-General Ban Ki-moon expressed his full support for Connect Africa, saying that it represented an important step in overcoming the Digital Divide. "This is an important vision," he said. "We need to make our best efforts, as part of our MDG programme, to bridge this gap." He also said that ITU should broaden its vision and commitment to meeting long-term global concerns, such as climate change.

"Connect Africa will not be just another Summit" said Dr Touré. "It will be a Summit of commitment between partners, not a meeting to negotiate new resolutions." The private sector, governments and international organisations will be called on to work together, and there will be a commitment to creating an environment that promotes the improvement of ICT. "ICT is a business, and the only way to ensure sustainability and large-scale effects is to provide an environment that lets business deliver ICT," added Dr Touré. "For too long we have had negative information coming from Africa; we have to bring positive news."

Speaking on behalf of GAID, Walter Fust, Director-General of the Swiss Agency for Development and Cooperation, said: "ICT is extremely important for managing knowledge for development, and for bringing local knowledge into development." He stressed the importance of Connect Africa and said that emphasis should be laid on a few targeted areas, such as using ICT to empower people with disabilities and to "reverse the pyramid of learning" by ensuring that all schools are connected to the Internet. He added that the goal is to establish 500,000 telecentres worldwide by 2015.

* While addressing the press conference, Dr Touré gave details of the Connect Africa Summit. It will be held in Kigali, Rwanda on 29-30 October 2007 under the patronage of Rwandan President Paul Kagame, and African Union Chairman John Kufour of Ghana . Connect Africa will be organised by ITU, the African Union, the World Bank and UN GAID, in partnership with the African Development Bank, the African Telecommunication Union and the UN Economic Commission for Africa. This collaborative effort will engage some 500 high-level stakeholders active in the region