Liberty Latin America is currently in discussions over a possible acquisition of Millicom, which has extensive operations in the region.

Millicom confirmed that Liberty Latin America had made a “preliminary highly conditional non-binding proposal” to acquire all shares. LLA also confirmed the proposal, although no valuation has yet been disclosed.

A merger between the companies would create a major converged player for the Americas market, as both have a strong presence across the region, with significant overlap in their footprints. Combined, the companies would be able to compete more effectively against the region’s heavyweight converged groups, such as America Movil and Telefonica.

Liberty Latin America is present in 21 markets across Latin America and the Caribbean. It was formed in January 2018 after being spun off from international cable firm Liberty Global. Its main focus is on cable, and it delivers fixed and internet services to the consumer and B2B sectors as well as connecting 40 markets via a subsea cable network. It also provides mobile services to around 3.5 million subscribers across the Caribbean and Panama.

Millicom meanwhile offers mobile services in eight Latin American countries: Bolivia, Colombia, Costa Rica, El Salvador, Guatemala, Honduras, Nicaragua and Paraguay. According to its own subscriber numbers, it places either first or second by connections in each of these markets.

In a bid to offset falling revenue from voice and SMS, in 2016 Millicom began looking to expand into new areas, including fixed-line and cable. In December 2018, it acquired Panama cable firm Cable Onda for $1 billion, strengthening its position in the Central American cable sector.

Millicom also has operations in Africa, but increasingly appears to be pulling out of the region. Over the past two years it has sold off units in Senegal and Rwanda, and merged its Ghanaian unit with Airtel’s operation. Its earnings from the region have been declining – in Q3 2018, Africa brought in 8.7% of group revenue, compared to 9.9% for the same period in the previous year and 15% in 2016. 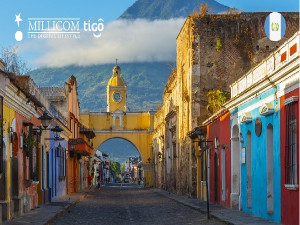