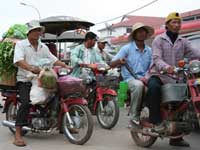 Emerging markets are defined as countries with low tele-density and Internet penetration, and a sizeable population largely underserved or completely without telecommunication services. Countries included in this study are Bangladesh, Cambodia, India, Indonesia, Laos, Pakistan, Sri Lanka and Vietnam; all half mobile penetration rates of under 50%.

According to Frost & Sullivan industry analyst Jeff Teh, over half of the world's mobile networks are believed to exist in emerging markets. "Most mature markets in Europe, the Americas and even Asia are fast reaching saturation, adding fewer connections and offering fewer growth opportunities. As mobile operators in Asia scramble to add another staggering one billion subscribers onto their networks, Asia's emerging nations offer the most palpable growth prospects, particularly in the rural sectors," says Teh.

He adds that such opportunities are, however, not without a gamble. "The inherent characteristics across these emerging markets are that they are generally lower-income hence low ARPU segments, with blended ARPU as low as US$3.90 per month in some countries, and subscribers are largely inclined towards prepaid services. In fact, between 86% and 97% of mobile users in these markets are prepaid subscribers."

The challenge for mobile operators and foreign investors as such is to introduce new business models and flat-rate pricing plans to appeal to these price-sensitive consumers. "Much of the uptake for mobile services will be limited to basic services such as voice calls and text messaging in the near term," Teh continues.

"Apart from having to manage the typical regulatory issues and service affordability, operators face a further uphill task of extending network connectivity well into the rural districts while managing operational and capital expenditure in a cost-effective way to maintain healthy profit margins."

An upside for mobile operators however is that fixed-mobile substitution is a distinct phenomenon in these countries, given that it is more cost-effective to erect cellular towers than to lay fibre-optic cables to install landlines.

"Competition from fixed-line services therefore is almost non-existent," Teh says, adding that despite this, competition among mobile operators is rife. "In most of the emerging nations, there are more than five active mobile service providers in any given market...Over time, however, we expect market consolidation as mobile penetration rates increase and sustaining operations prove tricky for the smaller operators."

To drive the adoption of mobile services among rural communities, some countries have rolled-out initiatives such as village phones and transmission tower-sharing among operators, as well as linking communities with mobile services to facilitate access and payments.

Teh believes that such innovation is necessary to achieve the connectivity vision, as wireless technologies will enable Internet access in these areas. "One of the most compelling features of wireless networks in emerging markets is the ability to provide a faster and cheaper alternative to desktop computers for accessing the world wide web, especially considering the lack of fixed-line infrastructure and power sources.

"Some tariff plans such as getting paid to receive calls are risky, although revolutionary, and will only be possible when mobile advertising takes off in a big way...but for now it remains a game of managing risks for potential high returns."