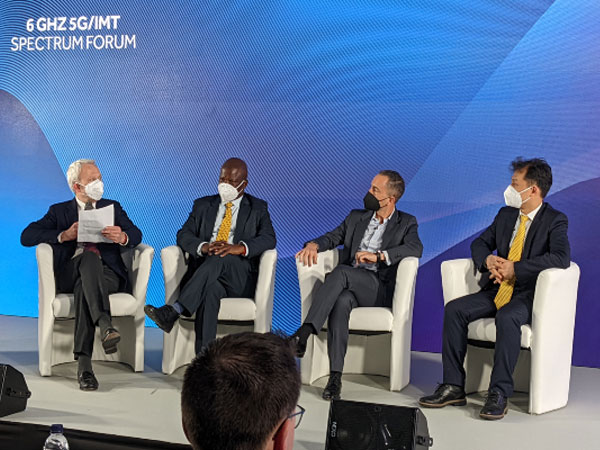 Heavyweight equipment vendors, operators and select regulators highlighted the 6GHz frequency band as the last opportunity to usher in a golden age of 5G connectivity and the true benefits of the network standard.

Joining hands in Barcelona on 1st March for Mobile World Congress were European operators including Vodafone, Deutsche Telekom, Telefonica, Orange, and Telia. Alongside the carriers were equipment manufacturing giants Ericsson, Huawei, Nokia and GSMAi, the data consultancy arm of the trade association.

Deutsche Telekom VP of spectrum policy and projects Jan-Hendrik Jochum said: “In the last 10 years [the EU industry] lost a lot of ground due to regulation which is much more investment-friendly in the US, and on the other hand we face the situation of mass fragmentation all over Europe as not all operators are following the same rules. This is resulting in a problem for delivering the European targets that are set by the Commission and this situation has resulted in a 5G investment gap of €150bn.”

By 2030, the EU aims to have all EU households connected to gigabit connectivity and all populated areas covered by 5G. Jochum added regulators had previously failed to supply operators with the required the framework and airwaves, and warned any further hurdles to attain “key” 6GHz waves could stifle the industry further.

“Not everything that was needed by the mobile industry was given [by regulators] in the past, and now we are facing a situation where 6GHz is in fact the only possible resource that can sort the situation for us and keep us competitive in terms of network quality products”, he explained.

Telefonica head of spectrum strategy Roberto Rodriguez agreed, stating the demand on 5G capacity is doubling every two years, and service quality could “saturate” if regulators do not assign the bands to operators.

GSMAi warned that governments need to carefully consider what is the most efficient use of 6GHz spectrum when holding auction, as the 6GHz block is the largest remaining piece of mid-band spectrum that can be licensed exclusively to operators - rather than being provided unlicensed, in which case it can be used for boosting fixed line broadband.

Kalvin Bahia, GSMAi principal economist who co-authored the trade body’s latest report ‘The Socioeconomic Value of the 6GHz Band’, said complete licensed use of the 6GHz band “will deliver the largest benefits across all countries”.

“If less spectrum [from the 6GHz band] is assigned to 5G this will likely lead to higher costs [for operators] and lower speeds. Annual operations expenditures can rise by 70%, and if just the upper part of the band is licensed then cost will go up by 20%,” said Bahia.

GSMAi’s research also found unlicensed assignment of 6GHz airwaves was discovered to be the least beneficial for global connectivity quality and coverage.

The GSMA advocates for all operators to eventually provide 5G which yields speeds of 100Mbit/s download and 50Mbit/s upload minimum for user experience at any time while “on the move”.

Without a varied use of a mixture of spectrum from different bands to provide widespread coverage and high speeds, services will become more expensive as more base stations are needed to plug gaps as data heavy new technologies such as connected cars and VR/AR become more prevalent.

The trade association also found tapping into this mid-band 5G can add more than US$610 billion to global GDP by 2030, but insufficient spectrum availability for operators can lead to a $360 billion of GDP growth lost.

Regulators from France, the UAE and Tunisia expressed their support of licensed use of the 6GHz spectrum for mobile.

Tariq Al Awadhi, executive director of spectrum affairs at Telecom Regulatory Authority for the UAE, noted there are 234 million global 5G connections accounting for 5% of mobile connections and it is forecast to be the dominant mobile standard by 2027.

He urged the industry to rally behind the need for licensed spectrum use to sway delegates at World Radio Communication Conference 2023 (WRC-23) to make “balanced decisions” when planning spectrum roadmaps.

“The ANF has registered no interest in allocating the upper 6GHz band for unlicensed WiFi 6 as the need of Tunisia is to reinforce the mobile network and the transport network. I highlight that the Tunisian administration allocated the 5GHz for WiFi since 2017 and the exploitation of this band has not exceeded 20% of what was promised.”

The GSMA with backing from Ericsson, Huawei, Nokia and ZTE put out a statement in May last year, calling on governments to make at least 6,425-7,125 MHz available for licensed 5G. The trade body also stated 2GHz of mid-band should be guaranteed between 2025-2030 and highlighted how 6GHz is the only mid-band wave with GHz-level bandwidth.