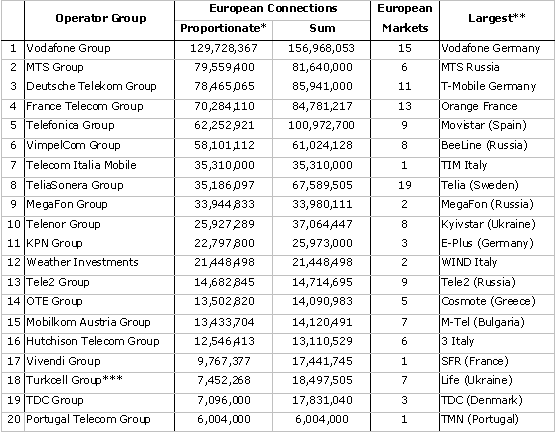 Fast-growing mobile markets in Eastern Europe such as Russia are rapidly shifting the make-up of Europe's mobile operator market, according to new research by Wireless Intelligence. The new data reveals that major operator groups in the region - most notably the Russian-based operators MTS, VimpelCom and MegaFon - are now accumulating customer bases that rank among the largest in Europe.

On a proportionate basis, MTS Group, which runs networks in six Eastern European markets including Russia and Ukraine, is now the second-largest operator group in Europe, trailing only Vodafone. MTS Group's main regional competitors - VimpelCom and MegaFon - are also now among the top ten largest groups, in both cases due mainly to their operations in Russia.

Other operator groups benefiting from the growth in Eastern Europe are Nordic-based groups such as Norway's Telenor and Sweden's TeliaSonera, both of which have various stakes in the Baltic region. TeliaSonera - which has holdings in 19 mobile operators in Europe, more than any other group - is seeing its subsidiaries in Russia (where it holds 43.8% of MegaFon), Ukraine (20.52% of Life) and even Kazakhstan (37.75% of Kcell) rapidly outgrow its traditional Nordic markets in terms of connections.

It is a similar situation at Telenor, where Ukrainian market-leader Kyivstar is now its largest majority-controlled operator in terms of subscribers. Mobilkom Austria Group also has a sizable presence in Eastern Europe, active in six markets in addition to its domestic market; its wholly-owned Bulgarian subsidiary M-Tel is now larger than mobilkom Austria in terms of connections.

Vodafone remains the largest operator group in Europe by some distance as a result of its presence in the big five Western European markets of France, Germany, Italy, Spain and the UK, despite the fact it is not a market-leader in any of these countries. The UK-based group also has 100% control of most of its European subsidiaries, the main exceptions being SFR in France (a joint-venture with Vivendi), and Vodafone Italy, where it controls 76.9%.

Among the smaller groups, mobile operators such as Hutchison's 3 and Tele2 are present in numerous markets (six and nine markets, respectively) across the region but are usually tier three players or lower, which reflects their relatively small connections base. Weather Investments - the investment firm that also owns 50% of Orascom Telecom, the Middle Eastern operator group - is the only non-telecoms firm on the list. Weather Investments runs the Wind-branded networks in Italy and Greece.

* Proportionate connections: % of total connections based on group ownership

** Largest European operator by connections based on >50% group ownership