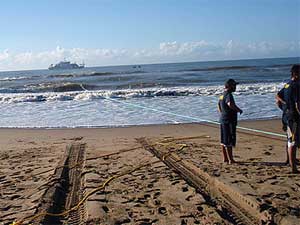 Enter fibre-link cabling. And enter the East Coast of Africa. As we have already reported, mobile banking is taking off spectacularly in Kenya. Simultaneously, East Africa is due to play host to three fibre-optic cables in the very near future.

Developing Telecoms has in the past referred to the high charges paid by those using the unique cable link to West Africa: charges well in excess of anything levied in Western Europe. East Africa now has the chance to avoid this level of excessive charge. Three cable systems are either in place in East Africa or will be very shortly.

The three cables are:

Quite simply by the end of 2010, Kenya, to name but one country, will enjoy connections to India, Europe, the Middle East and South Africa. The opportunities are breath-taking.

Seacom offers a full bandwidth solution, including backhaul, to Nairobi and Johannesburg, and is selling capacity on protected SDH (Synchronous Digital Hierarchy) transmission electronics. In particular, South Africa, Mozambique, Madagascar, Tanzania and Kenya are inter-connected via a protected ring structure.

Seacom has procured fibre capacity from Marseilles to London as part of the network, which is due to come into service in mid-July and for which, according to Seacom's highly upbeat website, "Testing is now underway!" This testing will cover Seacom's connections, interfaces and Synchronous Digital Hierarchy (SDH) systems to ensure that optimum configuration and traffic flow are attained before customers go live.

What is more, the critical portions of the Seacom subsea cable and land-based infrastructures have been completed on schedule. They include the branching units and shore-ends necessary to direct the traffic to the landing stations across Eastern and Southern Africa. All cable landing stations including the terminal equipments have also been completed and are operational.

The company, continued Seacom's irrepressible website, held an event in Mtunzini, South Africa where the media were welcomed by the Seacom team, who were able to give the guests a glimpse of Mtunzini cable station "and a nice brunch and presentation...It was also a treat to see everyone's faces when they arrived at the cable station and saw all the information they had to digest. If we could show everyone what we have accomplished, the look on their faces would be reward enough!".

In fact, Seacom is keen to demonstrate its commitment to the people of Africa and to show what an infrastructure project like it can do to improve education and communication in Africa.

In preparation for the launch of Seacom, major Internet Service Providers (ISPs) in Kenya have already rolled out cables along the country's highways, which will link inland stations to the coastline cables.

EASSy is expected to be ready in time for the World Cup in 2010 in South Africa. It is a fully integrated multi-technology network which will link the countries of East Africa to the rest of the world, with its administrative base in Nairobi, Kenya. EASSy's project management is keen to stress the role of optical fibre as "a nearly perfect medium for the transmission of information...the capacity of optical fibre to carry information is unmatched by any other technology. The ability to carry so much information is provided by two recent developments in optical fibre technology: optical amplification, and wavelength division multiplexing."

Initial research into EASSy goes back nearly fifteen years. The factors identified by the project evaluation team were the success or otherwise of existing networks, the rise of the Internet and broadband, the benefits of linking countries up to on another, and the effects of regulation and sector reform.

EASSy may have its two competitors but it remains the first fibre-optic connectivity to be planned between East Africa and global fibre-optic networks.

For its system design life - for the next 25 years - EASSy will give East Africa a 10,500 km main trunk with SDH transmission and which exploits direct optical amplification, Dense Wavelength Division Multiplexing (DWDM), and 3 x 10 Gb/s fibre pairs which if necessary can be upgraded to 32 x 10 Gb/s wavelengths per fibre pair.

The third cable - and one which has been in place since June 12 - is TEAMS (The East African Marine System). The presence of three systems may appear excessive and so it is worth explaining that the Kenyan Government had originally committed itself to EASSy.

Unfortunately, the Kenyan Government saw EASSy as too long in the time taken to construct it, and as having too much control vested in the South African Government. Kenya went as far as saying that South Africa wanted to control the cable.
Hence Kenya's decision to go into partnership with Etisalat in November 2006. And the strange situation of a country saying it is committed to one system and then commissioning another system of its own. In fact, TEAMS is shorter than the other cables, running 4,500 km from Mombasa to Fujairah in the UAE.

The wining bid to construct the cable went to Alcatel-Lucent who beat Tyco Telecommunications, Fujitsu, NEC and Huawei to win the US$82 million contract in October 2007. TEAMS has realised the need for a realistic initial capacity. An original capacity of 40 GB/s with upgrades to 640 GB/s is now 120 GB with 1.2 TB/s available at full capacity. Even if private use does not take off, perhaps because Seacom and EASSy are more successful, the Kenyan Government reserves the right to employ TEAMS as a vehicle for government use.

One area of difficulty which may emerge is not of a technical nature but rather the ownership of TEAMS. In addition to a basic division of Etisalat's 15% and TEAMS (Kenya) Ltd's 85%, the latter breaks down into: 20% share-holdings for each of the  Government of Kenya, Safaricom and Telkom Kenya, 10% for Kenya Data Networks and Econet/Essar, and holdings of 5% or less for seven other groupings. This is quite clearly complex and should make for complex board-meetings.

And the implications for East Africa?

Developing Telecoms has always believed in the power of the emerging markets. The comment on these recent developments by one analyst that "...Africa has been here before" is negative in its connotation and we cannot accept it.

The bottom line is that high-speed and high-bandwidth connectivity have been brought to a region which until now has been under-served - or not really served at all. One historically-based comment is that the fibre-optic cables now ready are as momentous as the rail link between Kenya and Uganda built a century ago. The latter opened up East Africa's interior to humans; the three new links will open East Africa up to the opportunities of a "wired" 21st century - education, commerce, banking, regional enrichment, communication in time of disaster, and partial bridging of the Digital Divide are some aspects that come to mind.

Certainly, Kenya's economic independence will be enhanced, as there will be less reliance on foreign companies to provide telecoms services, eg, satellite, at the high prices that operators do not like to pay and which in turn result in high charges that most local citizens cannot even afford. There will also be less dependence on other networks when it comes to Seacom and EASSy, although total independence for TEAMS is restricted by its terminating in the Middle East.

Of course, there are questions of ownership. The public sector share-holdings may be privatised and then there is the risk that one vested interest will acquire majority share-holdings in all three projects, going on to create a monopoly and impose the very same high charges that are so criticised in the case of West Africa (not only is the current fibre-optic cable from South Africa to Spain expensive for consumers it is also estimated to be ten times slower than Seacom!).

For the present, however, we look forward to reporting the benefits that the new fibre-optic lines will bring to East Africa.