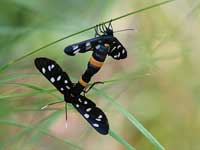 APC, the excellent newsletter from which we have on occasion quoted, has revealed that website bloggers have been suffering intimidation as a wave of environmental protests has been hitting Bulgaria. APC’s reporter is Pavel P Antonov in Sofia.

Pavel writes: “The Bulgarian police has called in bloggers and pressured them to stop writing about the recent wave of environmental protests that has swept across the country in the recent weeks.

"Michel Bozgounov, BlueLink's web designer, was one of several online activists who were summoned, interrogated, and advised "friendly" to refrain from blogging on environmental protests. During the conversation, which he promptly described on his blog, Michel saw an investigation file against himself and his blog, compiled by the National Service for Combat against Organised Crime, one of Bulgaria's several secret services that have inherited the notorious State Security of the former communist regime (so far, so bad - Editor).

"While the issue is hot in Bulgaria and broadly covered by the Bulgarian press, I thought it would be important to share it with the APC community and request your support. APC-member BlueLink will soon post the contacts of Bulgarian state institutions to which you can direct your messages.

“In the context of the apparent disability of Bulgaria's court and police to deal with organised crime, and which has been noted by the EU's recently published monitoring report on Bulgaria, repressions against environmental protesters have caused outrage among civil society and progressive intellectuals (the EU no doubt taking notes for its own purposes - Editor).

“The recent wave of protests has been triggered by a controversial decision of the country's Supreme Administrative Court to revoke the protected status of the largest nature park in the Balkans - the Strandja Mountain. The decision favours the interests of a local mayor and businessman, who pressed on with a hotel construction project in the park, on the Black Sea coast. The construction had already been proclaimed illegal by court and needed to be demolished, but the recent ruling against the protected status of the area gives it a green light.

"The Supreme Court's ruling caused massive outrage among Bulgarian citizens who saw it as just the next illustration of the state's inability to protect public interest, nature, and to enforce its own legislation. The country's nature treasures have been subject to brutal pressure, wild exploitation and over-construction in the last decade, made possible by the silence and inaction of the Bulgarian authorities.”

* Developing Telecoms welcomes the opportunity to report on developments of this nature. The Bulgarian security services have a brilliant track-record - pro-Central Powers in World War one, Pro-Axis in world War Two, pro-Soviet in the Cold War, and now this. One day they will get it right.