Commuters on Kazakhstan’s busiest railway line, Almaty-Astana, can now enjoy high-speed mobile broadband and phone services on their journey thanks to a contract between satellite specialist SES World Skies and local telco Astel...

As part of the deployment, Astel is utilising the Middle East beam on SES World Skies’ NSS-6 spacecraft to deliver Internet access, email and VoIP telephony services to National Railway Company passengers traveling the 1,300 km route between Kazakhstan’s largest city Almaty and its capital Astana. Astel has contracted over 100 MHz of transponder capacity with SES World Skies in a long-term deal to provide VSAT networks and government services in Kazakhstan. Part of that capacity is being used to provide the new service in collaboration with Transtelecom, the service company for Kazakhstan’s national railway.

The mobile communications, featuring transmission speeds of up to 2 Mb/s, are being offered free of charge to passengers along the popular rail line. Other rail routes are expected to be added in the near future.

“Our delivery of The National Railway Company’s broadband and telephony service marks a significant first in Kazakhstan,” said Vladimir Breusov, President of Astel. “The expertise of SES World Skies people and the reliability and reach of its satellites have enabled Astel to provide this groundbreaking service that is keeping commuters connected and driving economic growth across the region.”

“By delivering connectivity to one of the busiest and longest commuter routes in Kazakhstan, Astel is contributing to the country’s business productivity in ways not possible before,” said Scott Sprague, Senior Vice-President of Global Sales at SES World Skies. “We’re honored that SES World Skies knowhow and satellite capacity is making Astel’s vision and ambition a historic reality for The National Railway Company and its passengers.”

* Launched in December 2002 and located at 95° East, NSS-6 supports key telecom infrastructure and broadband networks across the Middle East and Asia. The high-performance Ku-band satellite delivers everything from DTH to VSAT network connectivity.

** Founded in 1993, Astel is a major telecommunications provider in Kazakhstan, building corporate data and voice transmission networks. Astel offers a wide range of services to its customers, including satellite telecommunications and wireless access, broadcasting and telephony, Internet access and VSAT networks. 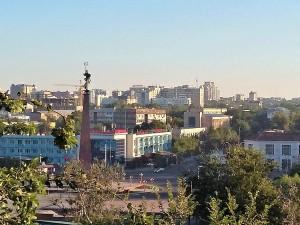