Telenor Serbia and Telekom Srbija have denied that they are planning to merge after rival operator SBB accused them off collusion in a bid to limit its market share and ultimately restrict the freedom of Serbia’s media.

The allegations were first made by local news agency N1, which is owned by SBB’s parent firm United Group. As reported by CommsUpdate, N1 claimed that it had seen documents that outlined a plan by state-owned Telekom Srbija – which operates as MTS – to transfer control of a cable network and TV content to Telenor.

N1 alleges that the aim of this transaction was to push SBB’s market share to less than 30%, as this would likely prompt United Group to review and cut funding for its media units, including N1. The agency went on to report that Telenor had signed various infrastructure leasing agreements with MTS, alleging that this was also aimed at damaging SBB’s market presence.

MTS confirmed that it had signed an agreement with Telenor that would allow the latter operator to lease its fibre optic infrastructure commercially, but dismissed the allegation that this was aimed at harming SBB, noting that the lease agreement was not exclusive and that Telenor was “only the first” company with which it had signed a cooperation agreement.

The operator stated that its deal with Telenor marked the impending liberalisation of its fibre optic network, and noted that the proposed agreements complied with European law and best practices and are subject to regulatory clearance.

A separate statement from Telenor also refuted N1’s accusations, confirming that it had no plans either to merge with MTS or assume control of its infrastructure. Telenor confirmed that it intends to “enter the field of internet and TV content” in Serbia but added that its future plans would not impact press or media freedom in Serbia in any way.

Telenor did not announce details of its offering in this area but confirmed it was in talks with possible content providers and partners, saying: “We want to introduce a new and different offer, and not remove any existing ones from the market. The emergence of a third competitor in this area brings market liberalisation, healthier competition, new investments and benefits for all.”

Elaborating on the fibre leasing agreement with MTS, Telenor noted that while it has “very good” infrastructure across Serbia, with 2200 base stations and 6100km of optical fibre, it leases infrastructure from companies including SBB and Telekom Srbija to guarantee adequate capacity.

N1’s allegations against Telekom Srbija mark the latest dispute in an ongoing feud between the state provider and SBB’s parent firm, United Group. The two firms effectively split the country’s broadband market as well as having direct control or significant influence over Serbia’s major news outlets.

The two firms are divided on political grounds, with their longstanding acrimony occasionally boiling over into legal action. Telenor has kept out of the conflict, stating that it wishes to remain in the market “without interfering in politics” but warning that it would enact “legal remedies” if it continues to suffer “unfounded and untrue attacks.” 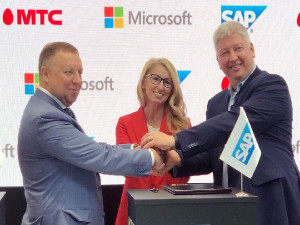