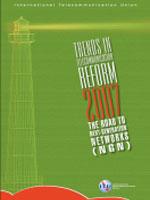 ITU has published guidelines for regulators in an attempt to foster investment and access. The medium is Trends in Telecommunication Reform: the Road to NGN, which has just been issued in its eighth edition.

ITU has released a major publication, Trends in Telecommunication Reform: the Road to NGN. In its eighth edition, Trends reports on the evolution of circuit-switched telecommunication into "Next-Generation" Networks (NGN), as operators around the world fight to remain competitive. The report aims at enabling regulators and policy-makers in developing countries to better understand the changes transforming the ICT sector so they can evolve their policy and regulatory frameworks to leverage today’s technological and market developments.

NGNs herald the shift from a "one network, one service" approach to the delivery of many services over a single network. Based on the Internet Protocol (IP), NGN migration builds on the expansion of broadband networks, the rise of Voice over IP (VoIP), fixed-mobile convergence and IP television (IPTV). These new networks are being developed using a number of technologies, including wireless and mobile and fibre and cable, or by upgrades to existing copper lines. While some operators are focused on upgrading their core — or transport — networks to NGN, others are tackling their access networks that reach the end user.

In addition, operators increasingly seek to collect advertising revenue from the range of user-generated, social-networking and other content running on ever-higher speed broadband networks, dubbed "ultra broadband" or "broaderband" technology. At the same time, mobile operators are upgrading their networks to find new revenue streams fed by offers of seamless connectivity to bandwidth-intensive applications like mobile TV.

ICT - a sector in transition

The transitions underway are changing the way we communicate and the way in which the ICT sector conducts its business. Developing countries seek to join the NGN bandwagon, motivated by the goal of making the Information Society a reality for their citizens and the concern about falling even deeper into the Digital Divide as developed countries roll out high-speed broadband networks. The bottom line for developing countries is not necessarily to adopt the same NGN experience as developed countries but to harness the potential of new technologies to meet their ICT development goals.

The good news is that developing countries do not have to wait to meet their goals. Technological developments such as broadband wireless access are making ICT development a reality — provided their regulatory framework is designed to remove obstacles to innovation and investment. Growth in the ICT sector has been nothing short of buoyant in the past year. By the end of 2006, there were a total of nearly 4 billion mobile and fixed line subscribers and over 1 billion Internet users worldwide. This included 1.27 billion fixed line subscribers and 2.68 billion mobile subscribers.

These numbers are even more impressive when updated to include two of the fastest growing markets: China and India, which in the first quarter of 2007 had reported nearly 200 million more subscribers between them — 87 million in China, and about 110 million more in India.

61% of mobile subscribers in developing countries

And yet the least developed countries still lag behind. Only 22 out of 50 LDCs offered broadband service in 2006, and users in these countries often pay extortionate rates for relatively low-speed broadband.

New regulatory frameworks to the rescue

Policy-makers recognise the need to abandon regulatory practices designed for an earlier era — such as those based on providing only one service on a dedicated network — that can stifle innovation and investment and lead to arbitrage opportunities. It makes more sense to embrace new regulatory practices that are pro-growth and pro-end user. With a growing range of wireless technologies that offer ever-increasing broadband capabilities, many countries seek to upgrade their regulatory frameworks to match today’s technological developments. So while wealthier countries test the business case for NGN services like IPTV and mobile TV, developing countries can already exploit today’s technological developments, leapfrogging their way to meet the pent-up demand for communications services — both basic and advanced.

What about the needs of end-users? NGN is regarded as an effective tool to achieve the goals of the World Summit on the Information Society (WSIS), especially to provide universal access to ICT. By enabling new businesses to flourish in rural and urban areas in both developed and developing countries, NGN helps achieve the broader development goals, promising socio-economic growth, reducing poverty and integrating citizens into the global economy, while preserving and promoting local content and culture.

Associated with Internet access at higher transmission speeds than ADSL, NGN will facilitate a full range of public services such as e-government and e-health. For this reason, government policy makers and regulators increasingly question not whether they should promote this relentless evolution, but rather how they can hasten it.

This year’s Trends in Telecommunication Reform contains ten chapters each addressing different NGN-related challenges and opportunities to enable regulators to harness the potential of NGN to build an Information Society for all. It includes an ICT market and regulatory overview to set the stage for the following chapters: