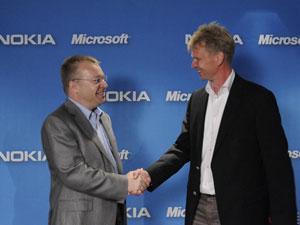 The biggest story of this year’s Mobile World Congress may have broken before the show has even started, with the announcement that Nokia and Microsoft have entered into a “broad strategic partnership” which will see Nokia adopt Windows Phone 7 as its primary smartphone operating system.

Nokia’s fortunes have waned in the past few years following the launch of highly popular smartphone models and platforms, such as Apple’s iPhone and Google’s Android platform. Nokia CEO Steven Elop deemed it “unbelievable” that the Finnish firm has not yet created a viable rival to either of these.

Elop, who is the first Nokia CEO not to hail from Finland, was hired for the express purpose of reversing Nokia’s ailing fortunes. Comparing the manufacturer’s position to a man standing on a “burning platform”, Elop this week said that the choice for Nokia was between being “consumed by burning flames” or plunging into “freezing waters”.

"There is intense heat coming from our competitors, more rapidly than we ever expected. While competitors poured flames on our market share, what happened at Nokia? We fell behind, we missed big trends, and we lost time", said Elop.

He went on to say: "Nokia is at a critical juncture, where significant change is necessary and inevitable in our journey forward. Today, we are accelerating that change through a new path, aimed at regaining our smartphone leadership."

Prior to joining Nokia, Elop was the head of Microsoft’s Business Division, which is responsible for Microsoft Office products. While this information could certainly allow for a cynical take on the new partnership, the reality is that many industry observers had anticipated an alliance between Nokia and Microsoft for some time as it makes good business sense for both parties.

The equation is simple: Nokia is a world-renowned manufacturer of handsets with a vast installed base, but it has failed produce a truly successful OS; meanwhile software specialist Microsoft has Windows Phone 7, a platform that despite receiving overwhelmingly positive reviews for its latest version, has thus far failed to capture the public imagination.

The new partnership will see Nokia working to improve the Microsoft platform using its considerable proficiency in areas such as hardware design, mapping and imaging. The partnership will see the integration of Microsoft’s search engine Bing into Nokia handsets and services, while Nokia services such as Nokia Maps will in turn be incorporated into Microsoft’s offerings. Applications for Nokia Windows phones will be built with Microsoft development tools.

Nokia’s global market share is around 40%, but in some emerging markets this figure rises to around 50%, making the Finnish firm the handset manufacturer with the largest installed base in the developing world. The new partnership should therefore have a significant impact in developing regions, but the focus on high-end smartphones, which lie far outside the price range of most customers in emerging markets, is worrying.

The alarm bells really start ringing with Nokia’s admission that it will continue to manufacture handsets which run on its ailing Symbian OS as a means of "leveraging previous investments to harvest additional value". Similarly, Nokia’s open source Linux-based mobile platform MeeGo – which was expected to be either actively nurtured or scrapped completely by Elop – instead finds itself in the limbo of “longer-term market exploration”. MeeGo’s problems will likely be exacerbated by the departure of its development chief Alberto Torres.

Unfortunately, these revelations could well translate to emerging markets receiving the short end of the stick; Windows Phone 7 integration into brand new Nokia smartphones is likely to focus on the developed world, with Nokia – rather cannily – attempting to boost Symbian’s profile in emerging markets as an affordable smartphone solution. Similarly, MeeGo is unlikely to shake off its also-ran status if it is only pushed in ‘unexplored’ markets as an alternative OS.

Hopefully we’re just playing Devil’s advocate; the new partnership has a lot of potential in both developed and developing markets, but it would be encouraging to see the new offerings from Nokia and Microsoft tailored to the specific needs of each. How about a low-cost, dual-SIM smartphone running on the Windows Phone 7 platform?