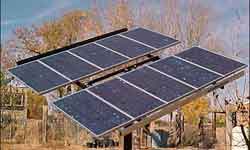 Is there a role for alternative energy sources in the mobile industry? Yes is the answer, according to Motorola, which recently announced that it had successfully completed a trial to demonstrate the feasibility of alternative power systems that can support remote GSM base stations.

And yes according to ZTE, which announced new generation 'green' base stations that reduce power consumption. Or indeed the GSM Association, which cites biofuel-powered base stations among the initiatives being tried in the projects that make up the GSMA's Development Fund.

So, whatever next? That, in a nutshell, is the question Informa asked Euan Blauvelt, Research Director of ABS Energy Research which is, not surprisingly, a provider of energy market research. Like Motorola, we decided to concentrate on the future role of those established favourites, wind and solar power. A good choice, apparently. "On the face of it," Blauvelt says, "both wind and solar power are ideal power sources in remote locations where grid power is too costly."

There are a number of other possibilities for remote power supply, however. Small diesel generators are the traditional solution but that requires transporting fuel a long way, sometimes over difficult terrain. Another popular solution is small hydropower (SH), consisting of mini or micro hydro units. These are widespread in Germany, while China is the world leader in SH technology, with well over 50,000 SH units.

However, sun and wind are natural resources and always there. Well, almost. "The problem with a single renewable source is intermittency," says Blauvelt. "If a wind turbine is installed and the wind does not blow, there is no power - similarly with the sun and solar power."

There are other issues too. Wind is now a mainstream generating technology but is highly controversial. Intermittency, a mismatch between periods of the highest wind force and peak electricity demand and the need for fossil fuel back-up to maintain grid security, have all undermined it. "Nevertheless, these problems will be overcome and it will continue to develop," says Blauvelt. Similar caveats apply to solar power.

One solution, he says, is a hybrid. Many combinations are possible but they often consist of three or even four small units: a small wind turbine, a small solar photovoltaic panel, a small generator and perhaps a small hydro plant. The Chinese have again pioneered this because they have many extremely remote sites. Is it viable? "Cost can be a problem with hybrids for household use, but for a remote telecoms base the investment should be available," Blauvelt suggests.

Intermittency issues apart, the efficiency of both wind and solar power has improved enormously in the last 15 years, he says: "Both were extremely expensive at the start but they each conformed to the standard industrial learning curve, with a progress ratio of 80%. That is, costs came down 20% with each doubling of production." Both are still expensive and usually subsidised but will continue to become cheaper.

Of course, one might add, if they had the profile of, say, mobile communications, investment would have flooded in. "The initial backing for alternative energy was slow," admits Blauvelt "but it has grown fast in the last five years."

"It started as a project for enthusiasts or 'tree-huggers' and was pioneered by small companies," he says. Things, however, have changed radically in recent years. "Big industry has moved in: RWE, BP, Shell, GE and the Japanese giants have all been buying small renewables companies and are investing heavily now. Industry and the energy companies are backing alternative energy sources with large investment. BP, for example, says its business will be 50% renewable by the middle of the century. The leading Japanese producers of solar - Kyocera, Sharp, Sanyo and such companies - have all made strong commitments to it."

Encouraging news. Still, the solar-powered handset is probably some way off, isn't it? Perhaps not. "There has been and is a lot of research and product development going on to develop fuel cells for small applications," says Blauvelt. "Small solar panels are already widely used in pocket calculators; mobiles and PCs are the next application."

Over to you, Motorola...