There’s encouraging news for Kenya’s remote communities with the announcement of a major deal set to bring telecommunications infrastructure to a number of underserved areas of the country.

According to the Kenya Broadcasting Company (KBC), the Communications Authority of Kenya has awarded contracts to five companies to roll out cellular mobile network infrastructure and services in 101 areas across the country.

Safaricom PLC, Airtel Networks Kenya Ltd, American Towers Company (ATC) Kenya Operations Limited, Seal Towers Limited and Alan Dick & Company (East Africa) Limited were awarded the contract to roll out the infrastructure and services in what are referred to as sub-locations in 17 marginalized counties in Kenya.

The project is being implemented through Kenya's Universal Service Fund (USF), whose purpose is to support widespread access to ICT services and promote capacity-building and innovation in ICT services in the country. Contributions to the fund include levies on licensees and appropriations from government as well as grants and donations.

The fund is expected to finance national projects that have significant impact on the availability and accessibility of ICTs in rural, remote and poor urban areas – and this project clearly fits that bill.

KBC says that the awarding of the tenders paves the way for the implementation of Phase 2 of the Voice Infrastructure and Services Project that will spur increased mobile voice and broadband connectivity, opening new possibilities to citizens in the beneficiary areas.

The project timeline set for this undertaking is 24 months. 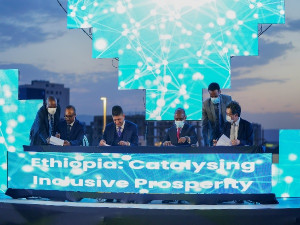