Global Wireless Digital Divide Siemens Klaus-D Kohrt
It seems only natural that we start our analysis of the Digital Divide with one of the giants of world telecoms. Dr Klaus-D Kohrt, a vice-president of Siemens Communications, explains the role of wireless technology - and makes some predictions. Access to modern communications is a basic requirement for economic growth and social harmony. As an example, so important are communications deemed that the Indian Government, in drawing up a list of the ten key goals for national growth, put communications on a par with water and energy in terms of importance.

That access to communications is an essential precursor for economic activity and growth is not in dispute. In studies carried out by the International Telecommunications Union (ITU) it was found that just the simple provision of a public pay telephone box in a remote village which previously had no communications with the outside world stimulated economic activity, increased employment and created new wealth.

Unfortunately, some twenty five years after the Maitland Report for the United Nations identified the importance of ensuring universal access to communications, the problem has remained largely unresolved. In many regions of the world, such as Africa , India , China and South America , there are still large numbers of people who do not have this access: indeed there are probably hundreds of millions of people who have not even seen or used a telephone. This gap between the telecommunications 'haves' who have easy access to services such as the Internet and the telecommunications 'have nots' who do not, has been dubbed the 'digital divide' and until comparatively recently no viable solutions to bridging this divide presented themselves.Now, however, there is a solution - wireless technology...

The benefits of wireless

The reason that so many people remain unconnected to any kind of communications network is simple. The cost and effort required to deploy traditional copper or fibre cable networks to remote rural areas would be astronomical and would take many decades. The lack of existing infrastructure, particularly electrical power, makes such a task almost impossible.

With wireless technology these problems are easily resolved. Wireless networks have the capability to cover large areas, regardless of the type of terrain, without the need to lay cables. Wireless base stations can be self-powered by a variety of methods. And there is no need to provide an individual wired connection to each household, anyone within the coverage area of the base station with a suitable terminal can gain access to modern digital voice and data communications services.

Most importantly, wireless networks can be deployed rapidly. A GSM network, for example, can be deployed and offering services within a matter of weeks, compared to the time needed to deploy a wireline network. And wireless is extremely cost effective. With the highly competitive nature of the global wireless market, particularly in GSM, infrastructure costs are very low. Handset and terminal costs are also low - and are likely to fall further. The Ultra Low Cost Handset initiative driven by the GSM Association is targeting the sub-US$20 handset, opening up the market to low-income users.

Wireless has proved its case beyond doubt. In the 25 years since the first cellular phone call was made, the global cellular market has grown to almost three billion, representing around half of the world's population. And growth continues apace. Developments in wireless technology have produced an evolution from analogue cellular, to digital cellular with the advent of GSM, and now the wireless world is moving towards IP (Internet Protocol).

A number of key elements need to be in place for operators to provide communications to the 'have-nots.' Most importantly, wireless services must be affordable as incomes are usually low in lesser developed markets. Low-cost handsets are essential and, as has already been indicated, this is being addressed by the global wireless industry through the Ultra Low Cost Handset initiative. Similarly, operators must be able to deploy their networks cost-effectively, and operational costs must be kept to a minimum.

Often the business plans which work for operators in mature markets are not appropriate and considerable 'thinking outside the box' is required. Operators such as Bharti Telecom in India , where average revenue per user (ARPU) is less than US$5 a month and falling, have set the pace with innovative ideas such as electronic topping up.And yet operators in lesser developed markets must also look to the future. In the early days of market growth, basic handsets offering simple voice and text messaging will meet the communications demands of their customers but very rapidly these demands will change. Subscribers will no longer be satisfied with basic communications: they will be looking for more advanced data and multimedia services. A further development will be the demand for persona lisa tion, which is already occurring in mature markets.

The mobile phone has become the world's most ubiquitous personal item. Many people would rather leave home without their wallet than without their mobile phone. With such a strong connection it is inevitable that the owners of mobile phones want to personalise them for their own individual requirements, not just in regard to simple things such as ring tones and wallpaper, but beyond that with applications such as personal service menus which cover all the applications and services which they need to fit with their individual lifestyles.

Operators in mature markets are already responding to this shift in demand and are offering an increasing range of services and applications which the end user can adapt and modify to his or her requirements. The demand for persona lisa tion will soon be a factor which operators in lesser developed markets will have to address.The big question for all operators is which wireless technology from the ever-growing range on offer is most appropriate for the delivery of advanced services and applications.

The reality is that in order to meet the demands of their customers for an ever-widening range of advanced services, operators will need to deploy a mix of wireless technologies, each having its own specific applications.

The most ubiquitous wireless technology is cellular radio which over the last fifteen years has undergone a transformation. From its introduction in 1991 GSM has evolved from delivering voice and basic text messaging through GPRS, which first introduced packet switching, to 3G/UMTS, which offers the first truly capable data communications capability. The next evolution will be to HSDPA and HSUPA which will deliver wireline data throughput speeds in both the uplink and downlink.

Germany is one of the countries leading the evolution to High Speed Packet Access (HSPA), the term used to describe the implementation of both HSDPA and HSUPA. T-Mobile is deploying Siemens HSPA technology to deliver high speed data services to its customers in Germany and Austria. Vodafone in Germany is also introducing mobile broadband services at DSL speeds using Siemens HSPA solutions. The service, dubbed 'UMTS Broadband,' will initially be offered in Dusseldorf, Frankfurt, Hanover and Munich. Both the T-Mobile and Vodafone services will deliver download speeds of 1.8mb/s, a significant improvement on the 384kb/s currently available.

Cellular technologies offer many benefits to operators looking to deliver personalised services to their customers. Above all cellular provides the key benefit of mobility, that ability to make and receive calls wherever you are and whenever you want. Another key benefit is global roaming which extends mobility from the user's home network to any other GSM/3G network worldwide. Today, for example, GSM users can use their phone in more than 130 countries. And, of course, the global market place behind GSM and the technologies that build on GSM ensure the availability of a massive range of cost-effective mobile phones.

Cellular alone, however, may not be the answer to delivering the right service mix and operators need to look at other wireless technologies as well. The alternative wireless technology attracting the most interest these days is WiMAX (Worldwide Interoperability for Microwave Access).

WiMAX is a standards-based wireless technology for providing high-speed, last-mile broadband connectivity to homes and businesses and for mobile wireless networks. WiMAX is based on the IEEE 802.16-2004 specification for wireless high-speed Internet access promoted by the WiMAX Forum. WiMAX offers a wireless alternative to cable and DSL broadband access. It can be deployed as a wireless 'last mile' solution for fixed and mobile operators planning to deliver wireless DSL services to rural and remote areas where providing services by cable or fibre is difficult or uneconomic. The WiMAX specifications have now been evolved to support nomadic users and a new standard is being defined for mobile WiMAX users.

Operators need to evaluate their technical options as the best solution will nearly always be a mix of different technologies which together deliver flexible solutions which meet user's needs.

Looking to the future

The global wireless industry is constantly looking to the future, working to develop the next generation of wireless technology. As developing a new radio interface can take up to ten years it is obvious that, even as 3G reaches maturity and alternative solutions such as WiMAX become more widely deployed, work is already ongoing to create the next generation.

Although there is still much detailed R&D still to be carried out, the overall picture of what will come beyond 3G in the 2010/2012 timeframe is already clearly outlined.

Within the next few years mobile networks will move away from having a core network accessed through a single air interface. Instead mobile networks will have multiple wireless accesses connected via a unified multimedia IP network. The access networks connected to the common core will include 3G, WLAN, WiMAX, GSM/GPRS/EDGE, as well as fixed networks such as ISDN and DSL.

This flexible approach will enable operators to use combinations of different access technologies to deliver a service mix which will be unique for each customer. And all this without burdening the user with any details of the technologies involved ? intelligence in the network and devices will hide these complexities from the consumer. Already operators are planning to use a mix of cellular and WiMAX technologies to deliver services and this trend will accelerate as the wireless world moves towards its future vision.

Dr Klaus-D Kohrt is Senior Vice President, Government & Industry Relations, Siemens Communications. Since completing a masters degree and a PhD in Mathematics and Computer Science in 1984 Dr. Kohrt has worked in the Siemens telecommunication business in various roles in Germany and abroad. His key expertise is in network architecture evolution and for many years he helped to develop and promote Siemens vision and product strategy both in the wireline and mobile carrier business. In 2003 Dr. Kohrt took over government and industry relationship management for Siemens mobile. In this role he serves on a number of committees and in January 2004 was elected Vice Chairman of the UMTS-Forum. 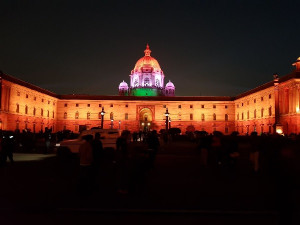 How do we get learning on track for the Fourth Industrial Revolution?
Partner Spotlight