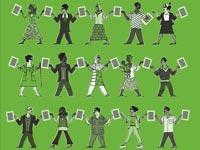 How do we ensure access to the internet is a human right enjoyed by everyone? This is one of the critical questions asked by an annual publication that highlights the importance of people's access to Information and Communications Technology (ICT) infrastructure - and where and how countries are getting it right or wrong, and what can be done about it.

Global Information Society Watch 2008 (or GISWatch), published in print and online by the Association for Progressive Communications (APC), the Third World Institute (ITeM), and Dutch development organisation Hivos, collects the perspectives of ICT academics, analysts, activists and civil society organisations from across the globe in over 50 reports.

"[Access to infrastructure] is beginning to be considered of less importance by some development funders and practitioners, including civil society and communication and information activists," argue the publishers in the book preface. They continue: "One of the consequences of this is the development of a conventional wisdom that leaves the domain of infrastructure development to the market; to operators and investors that do not always see the broader social value of communications in society, to governments that lack capacity and often clear strategy, and to international institutions that tend to approach it in a limited and ‘technocratic' way."

Internet - the petrol of the new global economy

Several thematic reports in GISWatch 2008 tackle burning issues facing access to infrastructure and related concerns. For instance, analyst Peter Lange lays out the pros and cons in a lucid discussion on net neutrality called "The end of the Internet as we know it?" while Sunil Abraham, from the Centre for Internet and Society in Bangalore, makes the bold observation that most computer users today remain "digitally colonised" due to our unquestioning use of proprietary - usually Microsoft-produced - software. Russell Southwood asserts that bandwidth, like oil, is a crucial resource in the 21st Century, in his discussion on accessing content, and Daniel Pimienta, from the Networks and Development Foundation (FUNREDES), points out that as the worldwide web grows exponentially, search engines are losing their capacity to index it.

Ben Akoh, from the Open Society Initiative of Western Africa (OSIWA), unravels the sometimes tangled issues that lie behind the equitable management of spectrum, in the process observing that: "[In] the African context the mobile phone capitalises on the innate orality of African culture and society, perhaps explaining its rapid uptake but, in the modern setting, it is an orality that has turned in on itself, because the cost of communication may have also eaten into the disposable income of the individual."

How global institutions, such as the UN and ITU are treating access issues are laid out by ICT for development analyst David Souter. The publication also offers another take on indicators, where authors Mike Jensen and Amy Mahan confront the fact that global consensus has not been reached on how to measure the information society in a way that results in reasonable comparisons between countries.

Thirty-eight country reports have been written for GISWatch 2008 by authors from countries as diverse as the Democratic Republic of Congo, Mexico, Switzerland and Kazakhstan. At the same time, six regional overviews contextualise the country reports, and cover North America, Latin America and the Caribbean, Africa, the countries that constituted the former Soviet Union, South-East Asia and the Pacific.

According to APC, Hivos and ITeM, GISWatch is both a publication and a process: it aims to build networking and advocacy capacity among civil society organisations who work for a just and inclusive information
society. This is reflected in the growing number of participating organisations writing country reports - 16 more than last year, the first year that GISWatch appeared. By doing this they hope GISWatch will impact on policy development processes in countries, regions, and at a global level.

GISWatch 2008 was launched at the Third Internet Governance Forum in Hyderabad, India in December 2008.