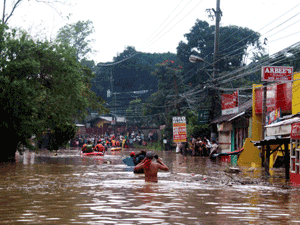 Thousands of people in the Philippines hit by Typhoon Pablo will be able to contact relatives and aid agencies will be able to carry out life-saving emergency work with the deployment of the Vodafone Foundation’s Instant Network today. Communications lines were cut when Typhoon Pablo hit the province on December 4, flattening buildings and damaging cell sites and telecoms transmission facilities.

The Vodafone Foundation's Instant Network is a portable mobile phone network which packs into three suitcases, weighs less than 100kg and can be taken on commercial flights. Once on location, a network can be established in 40 minutes. The ‘ultra-portable’ mobile network will be used in the municipality of Baganga, where relief agencies have set up an operations base and connected via satellite to wireless services provider Smart Communications’ network. Once operational, the portable communications network can provide coverage of three to five kilometres and the GSM base station can transmit and receive thousands of text messages and dozens of calls simultaneously.

The Instant Network has been previously deployed in response to a humanitarian situation, when it provided communications during severe droughts in Kaikor, Northern Kenya earlier this year. However, this is the first time it has been used in an emergency disaster situation.

Instant Network, developed by Vodafone in collaboration with Huawei, is being deployed in partnership with emergency communications specialist Télécoms Sans Frontières and Smart Communications. Smart has also provided 30 mobile phones for the use of relief agencies and local governments. Télécoms Sans Frontières has set up the satellite, which links the Vodafone Instant Network with the core network. Some of these phones will also be used to provide residents with free calls. This is the first time that the Vodafone Foundation has used the technology in a country where it does not operate. It is being deployed by a team from Vodafone New Zealand - engineers Cliff Robertson and Jason Rogers - and the Vodafone Foundation.

In February 2012, the Vodafone Foundation's Instant Network was set-up in Kaikor in partnership with Safaricom and the Kenyan Red Cross to assist with relief efforts and the delivery of food. The Kaikor community of 15,000 previously existed without power, running water or reliable communications and was dependent upon aid agencies such as the Red Cross to provide medical and educational support and sanitation.  In the 47 days of the deployment, 264,104 calls were made over Instant Network, including almost 12,000 free minutes used by aid agencies and humanitarian calling centres for those people without access to a phone.

Andrew Dunnett, Director, Vodafone Foundation, said: “The Instant Network is part of our Mobile for Good programme, where the Foundation is combining funding with mobile technology as an enabler. Providing mobile communications in a disaster situation enables aid agencies to work faster and more effectively, helps reunite families and saves lives.”

Ramon Isberto, Head of Public Affairs, Smart Communications, said: “This will complement our efforts to fully restore communications services in parts of the province where the typhoon’s damage has been severe.”

Sebastien Latouille, ICT manager and head of mission Philippines,Télécoms Sans Frontières, said: “Télécoms Sans Frontières (TSF) has been working in the affected area of Davao Oriental, where communications have not been available for the last seven days. The deployment of the Vodafone Instant Network will provide connectivity back in the area, greatly enhancing the relief work efficiency and enabling the displaced families to get in touch with their loved ones.”