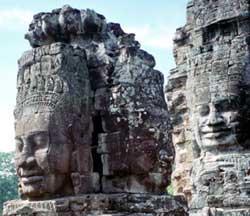 Claiming that Cambodia's morality is not yet advanced enough to withstand the lures of pornographic videos on mobile telephones, Prime Minister Hun Sen on May 26 announced a 10-year ban on 3G technology. Esther McClaren, a writer with the Phnom Penh Post, the main English language newspaper in Cambodia, brings us up to date with reactions locally.

Prime Minister Hun Sen's announcement was met by laughter and incredulity within the industry and days later the government was reported to be limiting the ban to the sending of live "video-streaming" only.

"I saw a pile of documents on my table, including signatures from my wife, National Assembly and Senate officials demanding that I deny these mobile phones with pictures," Hun Sen said in a speech he gave at a Buddhist ceremony in Kandal province broadcast on national radio.

"The Philippines and Vietnam are against debauchery through the Internet. Singapore is also against it. So, yesterday I called [Minister of Posts and Telecommunications] So Khun and told him please do not allow these phones. I said wait another 10 years until we strengthen social morality, otherwise even Buddhist monks fall down...this is very modern technology."

But in the days following the ban, which was met by charges of hypocrisy, collusion and naivety by industry experts and social analysts, the government has softened its tough stance on the new technology.

"I want to make it clear that the government is not banning 3G, just postponing until the appropriate time comes," said Minister of Posts and Telecommunications So Khun on May 29. "The ministry learned that using the 3G system will have a negative effect on young people's morality."

On May 31, government spokesman Khieu Kanharith was reported as saying that the ban applied only to live video streams and that telecommunication firms can still operate 3G networks if they remove the application.

Still, the move and its subsequent clarifications have alarmed senior telecommunications officials, many of whom have invested heavily in advancing 3G systems. Cambodia's biggest mobile phone company, Mobitel, was reportedly planning a $10-million upgrade of its network to accommodate 3G service on June 1.

"We're just sitting back laughing - everybody went overboard so we're going to wait until things calm down in a few weeks," said a senior executive of a local telecom corporation. "All it really shows is a lack of knowledge.

"The executive said the 3G service can be easily equipped with software to censor pornography or other images. He said the service is offered by more than 150 providers in roughly 70 countries and that such a national ban is unprecedented.
Alec Barton, telecommunications specialist and executive director of Developing Telecoms website, said that mobile phone companies are pushing 3G technology because it opens the downloading market and allows consumers to spend more on their phones. He said the story of Cambodia's 3G restriction has been "greeted with incredulity" by international experts.

"Take-up of 3G has been much slower than the manufactures expected and many industry players have over-invested in the technology before the people were ready for it," Barton said. "Many 3G handsets are still bulky, unreliable and have poor battery life. GSM is still OK for most people's use and cheaper. There is now doubt as to whether 3G will fully take over from GSM, particularly in emerging markets."

The name 3G stands for "third generation mobile phone technology." The first generation was analog, the second was GSM or "global systems for mobile communication.

"According to Terrance Jeyes, chief operating officer for Angkor Incorporation, 3G technology is most often used by young people for downloading games, "e-banking," and video-streaming (sending a live video). He said most video streams last only 10 seconds and would cost roughly $2.50 for that time span.

"We cannot block the progress of science and technology in the name of morality," said opposition party leader Sam Rainsy by phone from Paris on June 1. "We need to strengthen our moral standards. Leaders should lead by example instead of by dictate.

"Other opposition leaders were less restrained in their assessment of the ban.

"It seems that protecting social values is protecting one's own honor, not looking at why society is falling apart," said Sam Rainsy Party member Mu Sochua. "They claim they are trying to protect society's morality - but why not then help save the beautiful elements of Cambodian culture from other factors which are against tradition like corruption and the practice of having multiple wives?"

Theary Seng, executive director of the Center for Social Development, also questioned the use of morality as a restraint to progress.

"The heart of the issue here is not technology, but pornography. I have no issue with banning pornography. However, in banning the 3G phone technology, the focus is misplaced and costly," Seng said. "If we are to push this ban to its logical conclusion, we should also ban the internet, computers, televisions, video cameras and fax machines. They are all means of showing pornography.

"I'm more interested to know whether there are larger issues involved than the express desire to ban lewd behavior over the 3G phone."