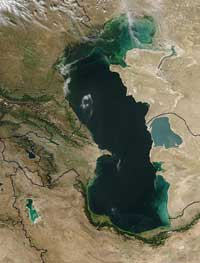 The markets of Central Asia and the Caspian region vary massively in terms of the degree to which their revenue potential has been successfully addressed. What is more, while outsiders might think of the Asian former Soviet Republics as a homogenous bloc of distant and relatively unfamiliar territory - so often lumped together as 'the stans' - the differences between the take- up of cellular services across these states is striking.

The dangers of generalisation are brought home in a new report from Informa Group. The report is very clear in stressing that Mobile penetration in Kazakhstan is nearing 50%, which seems impressive for a country where consumers' ability to spend is regarded as highly constrained compared with developed world norms. At the other end of the scale within this group of states we find laggers such as Tajikistan (7.67% penetration), Uzbekistan (7.32%) and Turkmenistan (3.46%).

Beyond the erstwhile borders of the former Soviet Union exist other comparable markets where the pent up demand for connectivity and communications services offers rich rewards for investors bold enough to navigate the cultural, regulatory and economic challenges. Iran, for example, has driven much of the recent growth in this part of the world, and is right at the heart of the Caspian region, bordering Azerbaijan, Armenia and Turkmenistan.

The Iranian mobile market has attracted the interest of investors from very different parts of the world, with South Africa's MTN ultimately entering the scene as the second fully national service provider. However, MTN has needed to make some unusual concessions to get this far. Principally, it has only been possible for the South African cellular giant to acquire 49% of the total ownership of the new company, despite apparently putting up 100% of the initial funds. It seems that the willingness to accept stringent foreign ownership restrictions, imposed by the Iranian parliament, has been the deciding factor in what was at one stage a battle with Turkcell to tap into the exciting revenue potential of this market. Turkcell was the early front runner but baulked at being prevented from having a majority stake in a new network. Some news reports also suggested that alleged business links between Turkey and Israel represented a security risk which caused alarm in the minds of some political factions in Iran.

Turkcell has enjoyed more success elsewhere in this region, operating successful subsidiaries in Azerbaijan Georgia and Kazakhstan via Fintur Holding, its joint venture with TeliaSonera. This makes Turkcell a highly influential player in the territory east of its home country (it is fitting for Fintur CEO Erdal Durukan to open the Informa Telecoms & Media 3rd annual Mobile Eurasia event in March 2007, especially because the conference is moving to Istanbul for the first time).

Erdal Durukan will be joined by leaders of other businesses which are highly active in this region. Richard Seney heads up MCT Corp of the USA, whose footprint extends into Tajikistan and Uzbekistan, as well as having a stake in one of the three mobile players on the Afghan market. These two major players will be joined by Vimpelcom's Sergey Avdeev, one of whose roles is managing the Russian celco's investments across the CIS. Such investments are growing in number. As well as commercial operations in Uzbekistan and Kazakhstan, Vimpelcom has very recently acquired the troubled Armenian incumbent wireline telco (and its mobile assets) as well as licences and shell companies in Georgia and Tajikistan. Vimpelcom may be the most aggressive Russian mover in the Caspian and Central Asian regions but its Moscow-based competitors are also present.

Central Asia is not free from commercial rivalries

Megafon is an operator in Tajikistan while MTS is active in Uzbekistan and Turkmenistan and has also been involved in an acrimonious battle for control of a mobile operator in Kyrgyzstan. The apparent victor is Altimo, a major stakeholder in Vimpelcom.

These are intriguing wrangles in a fascinating region where, despite apparently tough market conditions for even basic connectivity and prepaid voice, 3G is already a reality. Georgia and Tajikistan are home to live WCDMA networks and commercially launched services.

Industry watchers will be keen to learn first hand from the CEOs of two of the early adopters in the nascent 3G sector - Magticom of Georgia and Indigo (Tajikistan). Both will be available at Mobile Eurasia in Istanbul.