Caroline Gabriel of Analysys Mason has called for the telecoms industry to accept that while 5G will use a large amount of energy, what matters is how we justify this.

While the technology may have more energy efficient radios, the amount that is going to be consumed overall will still be huge - and according to Gabriel, we should stop beating ourselves up about this and do everything we can to reduce the consumption.

“The important thing is how we justify it, and how it enables greater energy efficiencies in other markets and industries, particularly in developing economies”, said Gabriel during Developing Telecoms’ Making 5G Sustainable panel discussion.

“We have to remember that ICT as an energy consumer is fairly low compared to many other industries, so anything 5G can do to enable them to be more energy efficient is going to have a far bigger impact on the planet that just slightly improving the kilowatt/hour ratings”, she added. “What’s really interesting is that some of the emerging markets are leading the way here; the first 5G deployments were primarily in developed economies and they’re really offering the same old thing – faster 4G that’s supporting our existing lifestyle.”

Gabriel agreed with the assertion of fellow panelist Enrique Dans that ‘degrowth’ is not a viable strategy going forward, but nonetheless noted that there are elements of our western lifestyle that could be a little less power hungry. Many emerging markets are framing their 5G thinking in terms of enabling new industries, new ways of life, more efficient ways of doing things – like remote healthcare, replacing trucks with drones, making heavy industries more efficient including the power industry.

These are often being pioneered in emerging markets; there are really interesting projects going on in Africa and Southeast Asia, and in parallel with that a lot of emerging economies are looking very seriously at renewables because obviously sourcing energy is very important to this whole question.

Giving examples, Gabriel noted that India has a lot of mandates around renewable energy and getting off diesel, and highlighted Guinea as having government initiatives around alternative battery technologies.

“There’s a real energy in emerging markets as they see 5G as an opportunity to bring connectivity to industries that haven’t previously had it and revolutionise processes, to leap ahead of other countries in some ways”, noted Gabriel. “In doing that, they’re rethinking industrial energy efficiency – it’s that big picture that’s important, not whether these countries will be able to save a little bit of money or power consumption because of 5G.”

Fellow speaker Emanuel Kolta of GSMA Intelligence argued that telecom firms will need to reorganize their energy structures, and Gabriel agreed with this point, noting that although some telcos are doing it more than others, there are many motivations for doing so – whether it’s economic to save costs, or if they are under mandates from governments.

She noted that the relationship of telcos in terms of their own policies is maturing, but also how they align with national policy: a lot of firms are now better at coordinating not just with government policy makers but also with counterparts in other operators. This challenge can only be met by telcos working together, rather than each telco having its own goals – that’s very important of course, but a lot of the efficiencies that could be achieved from 5G will come from operators co-investing and sharing a lot more than they have.

Dans observed that operators were already doing this with regard to towers, but Gabriel added that if telcos started building out shared active networks then they could start to be much more energy efficient. She gave the example that if operators are building out to rural areas, a shared network deployed largely on public cloud can take advantage of the energy economies of that cloud as well as economies of scale of a cloud that someone else has already built - clearly offering greater efficiencies compared to four operators each building their own network with their own infrastructure.

“I think there’s a lot of cooperation required on investment, on ROI, on differentiating on services rather than infrastructure, and then relating that very clearly to a set of policies that the whole industry can buy into”, noted Gabriel. “To be fair to telecoms, it’s been quite an advanced industry in signing up to a lot of protocols and global targets and in some ways it’s blazed some trails, but I think it needs to work a lot more cooperatively – particularly on a regional level. There’s some global cooperation but I think we need it to be regional for this common policy that would filter through very pragmatically into investment policies that would be different to what they’ve been used to up till now.”

In response to the question of whether it was feasible for emerging markets such as Africa to begin investing in 5G immediately, Gabriel replied that while it was of course impossible to make generalisations about a huge continent, many markets in Africa already are investing in 5G, citing South Africa, Nigeria and Kenya as trailblazers while acknowledging that all were at an early stage.

“The technology is there, and some of the regulators are giving out spectrum, which of course is usually the big barrier - but that's happening. We're not seeing the same regional waves as we've seen in previous generations, as in the big developed economies consistently move ahead of the emerging economies. There are some emerging economies where either the government or the operators are very determined to kind of leapfrog, so there is some of that effect.”

With any country, emerging or otherwise, spectrum availability is part of the issue but the primary issue will be whether there's a good business case for it. There are many African countries where 4G hasn't progressed a great deal beyond the major city centers, meaning that their coverage is primarily based on 2G and 3G. In such markets, they are examining ways that 5G could support more consumer activity as well as deliver additional revenue streams to justify this this huge build out.

Gabriel noted that many countries are now thinking it would be better to jump over a generation, put 5G out at a broader extent and make sure it supports industry, that it supports national objectives in terms of areas such as transport improvements. There are a lot of government digital policies in a lot of African countries which could be heavily supported by 5G and which may help with the financing, whether this is from the government, the World Bank, or another source. Funding and financing models will be forthcoming, so 5G may be deployed as a neighbor of digital progress for a country and for certain important applications like eHealth - pandemic response of course is a huge preoccupation at the minute. In such a scenario, it is not just feasible for African countries to invest in 5G – there will be a much improved business case compared to just pushing out more mobile broadband, as this is hard to justify in less urban areas where there may be very limited ability to pay for the services.

“Operators can learn from the cloud industry here”, noted Gabriel. “They’ve achieved vast economies of scale and – compared to what they process – quite a lot of energy efficiency. They’re not competing on that – they’re competing on the services and customers they can source on top of this. Telcos are moving that way and I think that’s particularly urgent in emerging economies, as 5G needs to enable other industries to progress here, so they need to differentiate themselves by the support and capabilities that they offer to other industries to go through digitalization, and not through ownership of a particular network.” 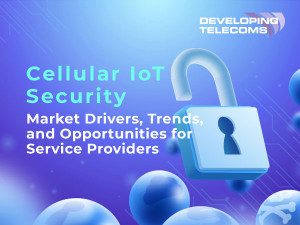